The Vogue Theatre was bubbling with loud chatter as face-masked humans exchanged their excitement about the long-anticipated show that had sold out the downtown venue on a Tuesday night. Lucy Dacus emerged from the blogosphere as a singer-songwriter who has since won many hearts and some significant awards in the music industry. She is recognized as a “breakthrough artist” who translates difficult life experiences into simple songs with complex emotional resonance.

At one point before the show started, the loud noise throughout the theatre was pleasantly interrupted by Dacus’ voice from the speakers. She addressed everyone and shared her deep gratitude for being healthy, happy and finally united with her Vancouver audience. She kindly requested for her wish for mask protection to be honoured as she wanted everyone vulnerable to feel safe. Even her vocal announcement was welcomed with thunderous applause.

The stage was a theatrical set resembling a vintage living room from the era of home videos. A giant TV screen with a retro-style frame was not just a decorative centrepiece but the ultimate portal to the whimsical, nostalgic memories of Dacus’ past. The lights dimmed as Dacus and her loyal band of many years started playing in the dark. The audience showed their appreciation with ultimate silence. After having compromised health on many occasions in the past two years, it only made sense to open the show with, “I’m not tired yet; we still got a lot to figure out.”. The lyrics are from “Triple Dog Dare”, the last song on her fresh album, Home Video. The visualization on the screen was a minimalistic animation of a rolling video tape on a blue screen. The light reflectors gradually cast brighter colours as she uncovered the story with her soft singing accompanied by a simple but punchy rhythm. As the song’s energy changed, the lights all masterfully synchronized to mimic the electric grungy, roaring guitars that close the first song. It was a beautiful introduction to the world of Dacus as an artist.

Her set was a mix of her new songs, a throwback to her older anthems, and some originally interpreted covers. The visuals were very artistic, with cute animations relating to the appropriate album covers or candid footage of her old home videos.

Dacus performed the new album material with a very intense emotional expression in her singing and the skillful buildup of the many guitar layers and keyboard strings. There were many peaks of edgy yet melodic guitar riffs backing up her solo. The almost crying guitar that cut through was a labour of love each time. She received not just applause and cheers, but massive singing support from the cheerful crowd. Everyone was singing in unison while clapping and energetically jumping to the rhythm of “Hot and Heavy”, a very energetic, pumped-up, euphoric song. That was not a surprise, as the song reached 13 million streams on Spotify in just one year. It did seem like a favourite one from the new album.

Dacus shared her smiles and seemed to bond with her audience effortlessly. There was open but respectful communication with the audience, and some fans even showered her with flowers and gifts they placed on the stage. Expressing her deep gratitude, she responded to a request for a song and played “Nonbeliever”. An older song, it received isolated, but loud, cheers from the first few rows in the audience. It is a song about leaving a small town, and she sings “you say nobody loves the city, nobody loves what can’t love them back”. Dacus masterfully planned where to place the request, seamlessly woven into her storytelling as her next chosen cover song was, “Home Again” by Carole King. This time Dacus’ relationship with home seemed personal as she sang, “sometimes I wonder if I’m ever gonna make it home again!”. She indeed left the impression she feels at home on stage, whether singing or playing her guitars or sipping from her hot tea in between lines.

The genuine courage for showing vulnerability to sing about her traumatic moments, complicated relationships, confused feelings and unpleasant dark thoughts created a very intimate atmosphere that put a blinding spotlight on her raw artistic expression when performing “Thumbs”. There was dead silence in the audience and eyes were fixed on her as she unfolded the layers of this rather dark tale that deals with her feelings for a dear friend’s abusive father. She sang unapologetically about the tormenting fantasy of murdering a man with her own hands, “I would kill him if you let me”. The song is a musical storytelling shock both on the album and on stage. The bass thundered between the verses and reflected the emotions in the room that became deeper and louder. Dacus’ could barely handle the emotional intensity herself and ended up growling at the end of the song.  As the song ended, the silence exploded into loud applause, and she invited everyone to sing a “nice song this time” along with her. A very cheerful motion graphics animation of a red balloon floating among little fluffy clouds announced a joyous feeling of relief, as if celebrating a triumph over the hard times, as “Going Going Gone” got its choir.

As soon as Dacus announced “Night Shift”, the first song that launched her success – all the arms went up in the air and didn’t stop swaying until the very end of the concert. The audience brought her back for an encore, and she melted everyone’s hearts even more with a unique balladic interpretation of “Believe” by Cher, dedicating the song to her father. The show closed with a stellar performance of an unreleased song. Dacus’ silhouette was bathed in blue light. Her singing and her weeping guitar reverberated through the theatre’s beautiful acoustics.

Later, outside the theatre, one could see the smiles on people’s faces, that had been hidden under their masks during the show. It was an unforgettable night in Vancouver. 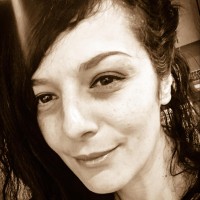